The gameplay of the Alien Shooter 2 Conscription author’s add- on has not changed from the second part of Alien Shooter. The player also visits a huge number of locations, destroys monsters, crocodiles, durable mobs and overcomes all sorts of difficulties by killing them. For example, the more we kill monsters, the more of them will spawn in the next level. This is the artificial intelligence of the game.

Despite high expectations, Conscription turned out not to be what fans of the series imagined it to be. Most monsters fall out of small gaps, and their number exceeds the volume of the level itself. Also, the developers do not lead us along the linear development of the plot, as was the case in the first and second original versions of the game, but immediately throw us into hardcore hell, where you can’t cope is the only possible option.

There are also many weapons. A plasma thrower, a flamethrower, a couple of shotguns, a lot of machine guns, including Gatling, which we will install on a jeep and ride in one of the missions of the game. Body armor – comfortable or protective – to our taste. All equipment was carried over from the second part of the game, but they clearly did not know what to do with it.

The graphics and the entire gameplay were left at the same level. If the fans were waiting for some new developments, then the development studio itself considered that leaving everything at the same level is normal, because everything new is well forgotten old. The game didn’t get any real buzz, but the faithful throughout the game stayed true to the Serious Sam prototype and made it to the end of Alien Shooter 2 Conscription. Many were satisfied. 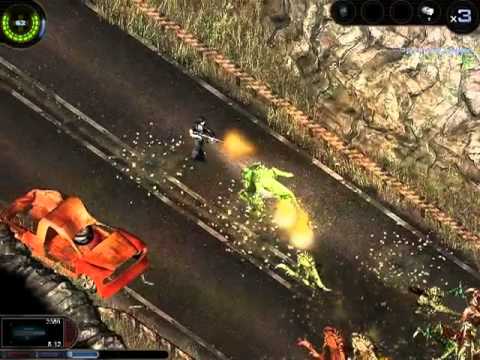