Dead Effect is a first-person shooter set in the year 2045 on the space colonization ship Meridian. The protagonist, Jane Grey, a member of the elite unit Block 13, awakens from cryosleep on day 176 of the expedition, well ahead of schedule.

As it turns out later in the story, the crew members turned into zombies as a result of infection with an unknown disease. Because of this, the computer woke up the compartment of “Block 13”, in accordance with security protocols. Gray’s suit informs her that she, too, has the virus in her blood.

Almost immediately after the start of the game, you will contact Dr. Wagner from the Meridian research compartment, he will tell you about this virus created in the Dead Effect project, which, as it turned out, first kills its victim from the inside, and then reanimates, repeating this constantly. Making her way through the labyrinths of the ship, Jane receives an injection that slows down the development of the disease inside her body.

The main problem will be the solution of the question of how to turn off the autopilot. After breaching the security of the flying craft, he sent the Meridian back to Earth. It is necessary to prevent the virus from entering the planet and not killing all its inhabitants.

The gameplay in the game is completely standard for the first-person shooter genre. It is possible to slow down time for spectacular, and most importantly effective, shooting zombies. You also need to find hidden data and codes for doors in order to go further in the level, there will be 12 of them. Health does not auto-regenerate, you need to find capsules with first-aid kits.

There are “Survival” modes, where you need to kill a horde of zombies for a certain time, and “Biohazard”. It is necessary to destroy a certain number of waves. 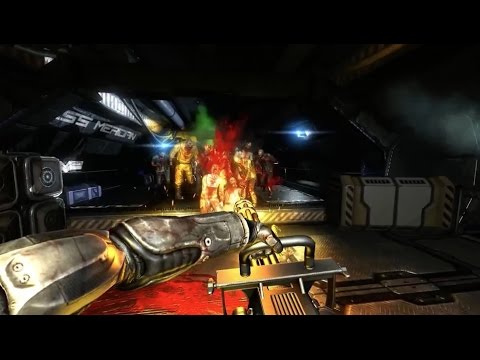